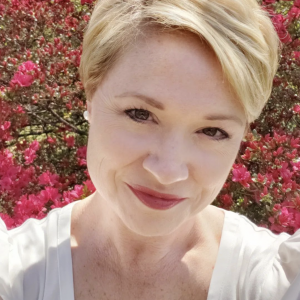 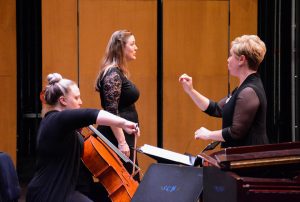 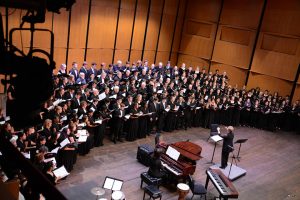 For over 20 years Jessica Irish has enjoyed a career as a music educator, conductor, and vocalist in the Washington metro area. Having taught music at the elementary, middle school, high school, and collegiate levels in addition to having led community choral ensembles, she has a comprehensive understanding of the needs of singers of all ages. With a demonstrated track record of excellence in teaching, her school choral ensembles have consistently received Superior ratings at annual assessment and competitions, and have performed by invitation for the Governor of Virginia, at the Virginia Music Educators Association (VMEA) State Conference, at Strathmore and the Kennedy Center, and overseas as part of a German Choral Exchange Program.

A native of Pittsburgh, Mrs. Irish earned a Bachelor of Science in Vocal and Instrumental Music Education from Indiana University of Pennsylvania (IUP) where she performed numerous operatic and musical theatre roles, including having been cast as “Susanna” in Mozart’s The Marriage of Figaro as a sophomore. She was the first-ever vocalist to win the IUP Concerto Competition. Her first professional choral directing opportunity came when she was hired at the age of 21 as the music director at a church in Indiana, PA, where she served for the remainder of her undergraduate years.

In 2000 Mrs. Irish relocated to Northern Virginia to accept a teaching job as the choral director at Langston Hughes Middle School in Reston, VA. She subsequently served as the first long-term choral director at then-new Westfield High School where she composed the school alma mater song, Black and Gold, which continues to be sung with pride at school events. While teaching at Westfield, she also earned her Master’s Degree in Music Education from Shenandoah University. Following 9 years at Westfield, she began a 6-year tenure as the choral director at Annandale High School. After her children were born, she made the decision to take a hiatus from teaching; during that time she served as the full-time music director at Messiah United Methodist Church in Springfield. In 2021 she returned to the classroom, serving as the elementary music specialist at Olde Creek Elementary in Fairfax, and recently began as the new choral director at South Lakes High School (August 2022).

Mrs. Irish taught as an adjunct faculty member at George Mason University, where she supervised choral music interns during their student teaching experiences, and Northern Virginia Community College (Alexandria campus) where she directed the NOVA Community Chorus, performing in the beautiful Schlesinger Hall. At NOVA she developed a Side-by-Side program with local high schools who joined the NOVA Community Chorus on stage in a multigenerational choral ensemble. She has served as a clinician and presenter at professional music educator conferences, most notably presenting her methods of differentiating sight-reading instruction in the choral classroom. Mrs. Irish is a Past President of the Fairfax County Choral Directors Association, has served on chorus curriculum writing teams for FCPS, has taught music teacher recertification courses for FCPS teachers, and has served in leadership positions for the Virginia Chapter of the American Choral Directors Association.

Outside of the classroom Mrs. Irish performed for many seasons as a professional chorister and soloist at the Basilica of the National Shrine of the Immaculate Conception (North America’s largest Catholic Basilica located in Washington, DC), and later at Washington National Cathedral. Through her involvement with these professional organizations she was featured on radio and television, and sang before some of the nation’s top dignitaries including Supreme Court Justices, Former US Secretary of State Madeleine Albright, and President Obama. She travelled internationally with the Basilica Choir and is featured on the choral CD Pope John Paul II: A Celebration of Life and Faith, recorded in the ancient Basilica of Santa Maria Maggiore in Rome, Italy. Throughout her career she has been engaged as a soprano soloist across the Washington region, with a focus on sacred oratorio performance.

She is sought after as a guest conductor, having conducted District Chorus in numerous VA districts and other honor events such as the 6th Grade All-County Chorus in Loudoun. She has conducted in concert at Washington National Cathedral (Music for Praise and Petition) and, separately, numerous major works for chorus and orchestra including Orff’s Carmina Burana, Handel’s Messiah, Schubert’s Mass in G, Mozart’s Solemn Vespers, and musicals including West Side Story, Into the Woods, and Fiddler on the Roof, among others.

Mrs. Irish believes that every chorister deserves a comprehensive experience which includes study and performance of traditional and folk music, jazz, pop, musical theatre, world music, and music of historic and cultural importance in a variety of languages, regardless of skill level or ensemble placement. She is a proponent of students engaging in real-world music-making beyond the walls of the school, often in cooperation with other regional musicians and organizations.  She strives to create a learning environment which is both nurturing and challenging, where students discover their gifts—musical and otherwise—and learn how to apply them in meaningful ways for their own growth and for the betterment of our community. Most of all, she is passionate about music and wants her students to experience the joy of making music -- singing is FUN!