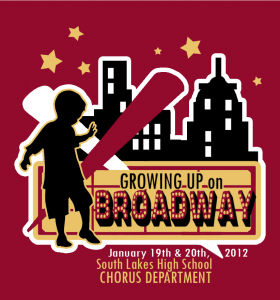 Broadway Night 2012 was exciting as we explored the theme of Growing Up On Broadway.

Auditions for Broadway Night 2012 were completed on November 8. For reference,  here were the audition guidelines and the application.

Not everyone likes to be on the stage, but it takes a lot to put on a Broadway Show.  Be a part of the action by helping out with one of the Broadway Night Leadership Roles.

Broadway Night is a BIG commitment, but it is also a rewarding experience that you’ll never forget. The following are the latest documents:

BRAVO to everyone on a FANTASTIC CLOSING NIGHT!  I am so incredibly proud of you!!

Many, many thanks to our FABULOUS Student Directors & June Pennell, our Broadway Night Chair, for all of the time, dedication and committment you gave in making this year’s show a success.

Special thanks to  Marcia O’ Brien, Kevin Danaher, Hoori Kruszewski, the PCA,  and all of the parents who helped with show nights and the cast lunches too!!

I love and appreciate the many gifts from the 2012 Cast and I am very excited to use my Spa Day at Elizabeth Arden. Thank you so much!

Stay tuned on information about the Cast Party. . .

Pictures and videos from the show have been uploaded to the following links: